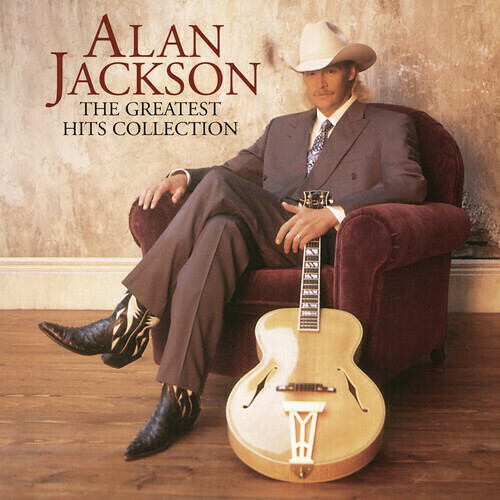 Alan Jackson has earned his place in country music history. Behind that guitar and knowing smile stands a singer-songwriter with a knack for creating simple yet impactful tunes, combining the honky-tonk sensibilities of vintage Music Row with contemporary production to make him a statesman of the genre. He found success by staying true to his love of traditional country music, putting 50 singles into the Top 10 of Billboard’s country singles chart—more than half of them climbing all the way to No. 1.

Originally released in 1995—just five short years after he broke into the mainstream with the Top 5 country album Here In The Real World—The Greatest Hits Collection is the perfect survey of Alan Jackson’s early hitmaking years. Available for the first time on vinyl as a 2LP set, The Greatest Hits Collection features chart-topping classics like “Don’t Rock The Jukebox,” “She’s Got Rhythm (and I Got The Blues),” “Chattahoochee” and “Summertime Blues,” plus the exclusive new songs “Tall, Tall Trees” and “I’ll Try,” both of which topped Billboard’s country singles chart as well.