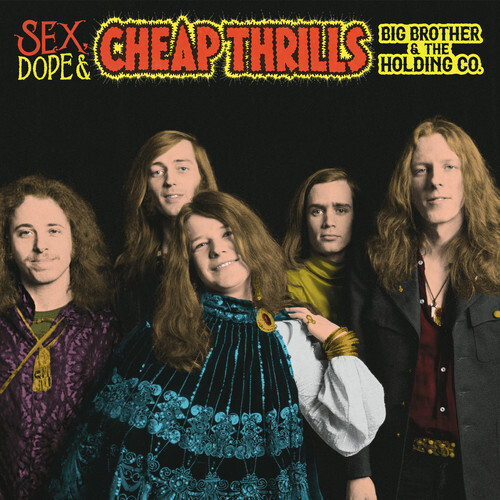 A new take on Cheap Thrills, the major-label debut from Big Brother & the Holding Company that introduced the world to Janis Joplin, will be released on Nov. 30.

Sex, Dope & Cheap Thrills consists of rare and unreleased tracks recorded during the sessions for the 1968 LP.

The upcoming album, which was the name the band had originally chosen for the record before Columbia deemed it too controversial, includes 29 studio outtakes and a live performance of "Ball and Chain" from an April 12, 1968, concert at San Francisco's Winterland. Only five of the tracks have been previously officially available on various reissues

Cheap Thrills seems to have stood the test of time, Dave Getz says in the liner notes. "It might be because it is arguably the greatest work by a great artist, Janis Joplin. It is certainly the greatest and closest representation of what Big Brother & the Holding Company was as a band and I would add to that argument that Big Brother/Janis as a band, and as a SOUND, was the embodiment of the San Francisco, psychedelic, counter-culture of the 1960s. ... On another, more metaphorical level and in the perspective created by the distance of 50 years, I see Cheap Thrills as a time capsule for the year 1968. That year might have been the moment when it all came to a boil for Big Brother, Janis and the entire 1960s, acid-infused, revved-to-the-max, counter-culture generation."

Then I heard that voice, she writes. "Good Lord -- spontaneous explosions of every emotion -- no holds barred. ... Janis had no trouble sliding from the apron-clad '50s into the no-bra '60s. We all took every advantage of the new freedoms, and it was reflected in the music. ... This album, because of its worldwide success, made it possible for everybody to hear the phenomenon that was previously limited to the San Francisco Bay Area. Now, a new generation gets the Cheap Thrills experience to enjoy."