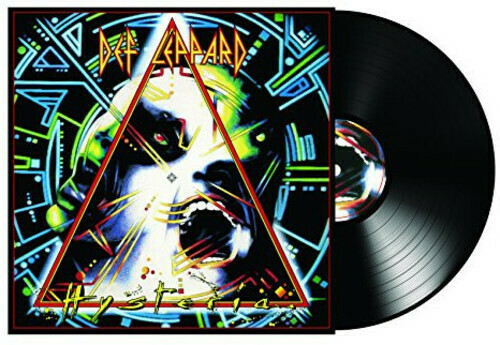 Double 180 gram vinyl LP pressing including poster. Digitally remastered 30th Anniversary edition of the veteran rock band's classic album. Hysteria is the fourth studio album by Def Leppard. It was released on August 3rd, 1987 and is the band's best-selling album to date, selling over 25 million copies worldwide and charting at #1 on the Billboard 200 in the US. Featuring the singles 'Animal', 'Women', 'Pour Some Sugar On Me', 'Hysteria', 'Armageddon It', 'Love Bites', and 'Rocket'. The album charted at #1 on both the Billboard 200 and the UK Albums Chart. Hysteria was produced by Robert John "Mutt" Lange. The title of the album was thought up by drummer Rick Allen, referring to his 1984 auto accident and the ensuing worldwide media coverage surrounding it. It is also the last album to feature guitarist Steve Clark before his death, although songs co-written by him would appear on the band's next album, Adrenalize. The album is the follow-up to the band's 1983 breakthrough Pyromania.