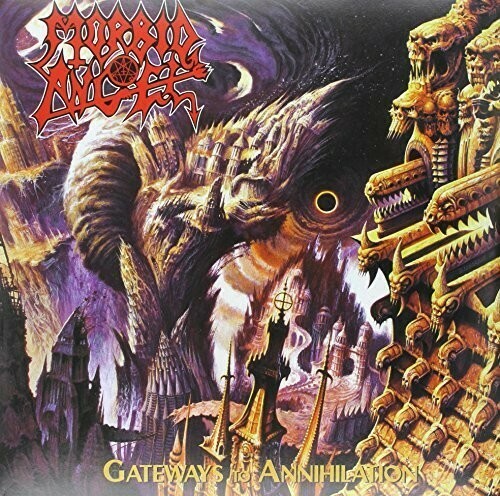 Limited vinyl LP pressing of this 2000 album from the death metal band. Gateways To Annihilation is the sixth studio album by Morbid Angel. This album saw a change in musical style as the speed-laden intensity of the previous album Formulas Fatal to the Flesh was abandoned for a slower, more droning style, reminiscent of Blessed Are the Sick. This is also the first album in which Steve Tucker contributed lyrics and music to the band. Dan Seagrave painted the album cover. This marks the first Morbid Angel album cover he had painted since Altars of Madness. Morbid Angel is based in Tampa, Florida. The band's songs are complex in arrangement, owing to the considerable technical skills of both guitarist Trey Azagthoth as well as drummer Pete Sandoval, the latter of whom also played in the grindcore band Terrorizer. According to Nielsen SoundScan, Morbid Angel is the third best-selling death metal band in the United States.