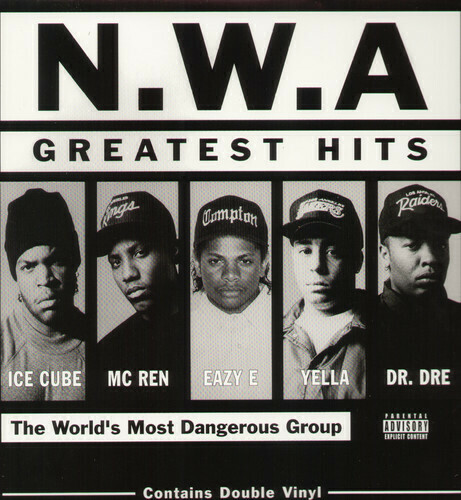 N.W.A.'s Greatest Hits is a greatest hits album originally released on July 2, 1996. The re-released version contains two bonus tracks by the reunited group. The track "Chin Check" was recorded by Ice Cube, Dr. Dre, MC Ren and Snoop Dogg under the N.W.A name for the soundtrack of Next Friday. "Hello" first appeared on Ice Cube's sixth studio album War & Peace - Volume 2 (The Peace Disc) and featured Dr. Dre & MC Ren.N.W.A.'s career isn't necessarily one that lends itself well to anthologies. Though they had important singles, especially in the underground hip-hop community in the late '80s, they never received any support from radio or MTV, which meant they never had any official "hits." Instead, their albums were more important, popular, and influential, than their singles, even if individual tracks - "F*** tha Police, " "Straight Outta Compton, " "Gangsta Gangsta, " "Express Yourself" - became the focus of attention. And, if you notice, all those songs were from Straight Outta Compton: the only good album the group ever made.