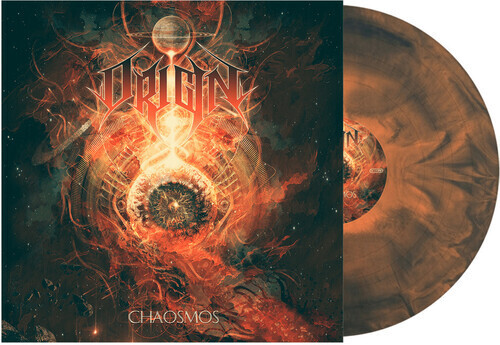 United States-based tech-death masters Origin strike again with their new album, 'Chaosmos'. The long-standing outfit ring in their 25th year on 'Chaosmos'. The same fury, brutality, and musical savvy that brought Origin critical acclaim and a devout fanbase on 'Unparalleled Universe' (2017), 'Antithesis' (2008), and 'Origin' (2000) returns with reinvigorated intensity, passion, and skill. In 2022, the group are undeterred by unprecedented roadblocks and global uncertainty as they push forward. Indeed, Origin's new-era shock and awe mission is complete on 'Chaosmos'.Formed in Topeka, Kansas, in 1997, Origin has eight full-length albums to their name. 'Chaosmos' is the tip of Origin's newly honed spear. Fronted by the frenetic "Ecophagy", stabbed mid-way through by vicious duo of "Panoptical"/"Decolonizer," and capped by the ominous coda of "Heat Death," this is some of the band's most riveting work to date. That vitality manifested itself deeply in the lyrics for 'Chaosmos'. Whereas previous full-length, 'Unparalleled Universe', explored cosmosophy and had tendrils of inspiration from Frank Herbert's Dune, 'Chaosmos' is more ominous. For all the pain, suffering, joy, and accomplishment humanity faces, it's relatively nothing in the front of the universe's gaping maw. Origin re-tapped Kansas City-based studio guru Rob Rebeck (Unmerciful, Vänlade) to engineer, produce and mix 'Chaosmos'. The production team holed up in GFM Recording Studios in Blue Springs, Missouri and Chapter 2 Recording in Lenexa, Kansas, over 14 days. When Origin broke out of the heartland in the aughts, death metal had no idea what was coming. A new era of brutality was born. Now, many years later, the outfit are ready for another round of redefinition on 'Chaosmos'. They've blazed trails few could barely conceive; they've achieved more than they ever thought possible and Origin continue to innovate and enervate all.

In the event that Red Zeppelin Records is not allocated a newly released title by our distributors, any pre orders of said title will be promptly refunded in full.