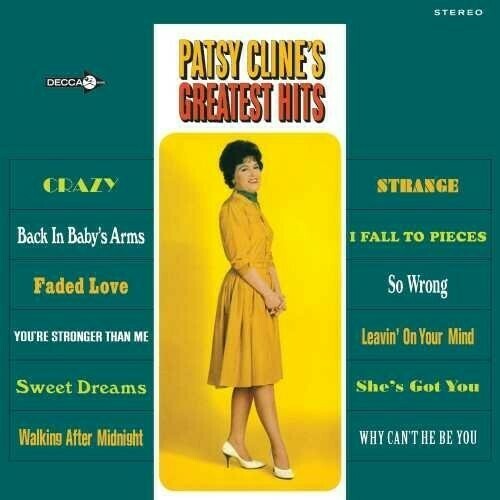 Limited vinyl LP pressing. This album, first released in 1967, collects Patsy Cline's biggest hits. Producer Owen Bradley surrounds Cline's full-throated, emotionally charged vocals with lush, sophisticated arrangements that set the standard for Nashville's "countrypolitan" sound. The album consists of Cline's biggest hits between 1957 and 1963. The album contains Patsy Cline's signature hits including "Walkin' After Midnight," "I Fall to Pieces," "Crazy," "She's Got You," "Leavin' On Your Mind," "Sweet Dreams," and "Faded Love." The version for "Walkin' After Midnight" was pulled from the 1961 recordings rather than the original recording made in 1956 while Cline was still under her Four Star Records contract. "So Wrong" and "Strange," two lesser known hits, are also included. Several songs are included that were never hits on the American Country or Pop Top 100 Charts: "You're Stronger Than Me," "Why Can't He Be You" and "Back in Baby's Arms." A slower version of "You're Stronger Than Me" was a b-side to the single "So Wrong" back in 1962, but this collection contains Cline's initial recording of the song that was never released. The released version made it's way to #103 on the U.S. pop charts. "Why Can't He Be You?" was a b-side to the single "Heartaches" and reached the #107 position on the U.S. pop charts. "Back in Baby's Arms" was a #1 hit in Australia briefly in 1963.