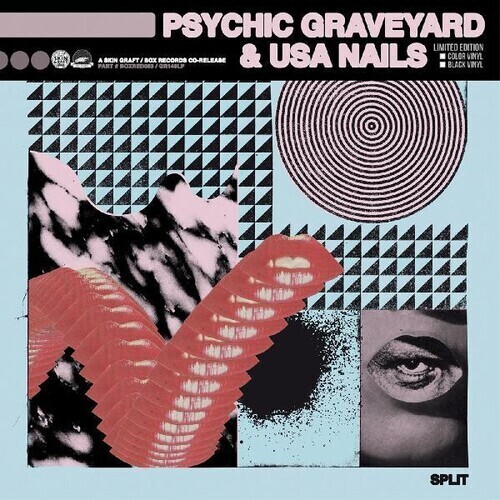 Psychic Graveyard & USA Nails / SPLIT - The 'in-name only' United States and Kingdom's divisions are more raw and splintered than ever before. And it's from this place of division that the USA's PSYCHIC GRAVEYARD and SKiN GRAFT Records have joined with the UK's USA NAILS and BOX Records to form 'Split'. Having been remixed by the likes of MSTRKRFT and LIARS, Psychic Graveyard are no strangers to collaboration. Here they determinedly ease layer upon cacophonous layer to their methodically set stage before burning it to the ground. The cuts served up by slabby noise-rock /angular post-punk /dissonant no-wave cognoscenti USA Nails feature notes that work, notes that don't work, wonky ping-pong guitars and shitty solos while musing over clinically medicated anxiety, internet commentators and Orwellian data practices. Although he didn't realize it at the time, drummer Tom Brewins broke his arm just before the band recorded. He got better, but maybe the rest of us won't. PSYCHIC G R A V EYA RD