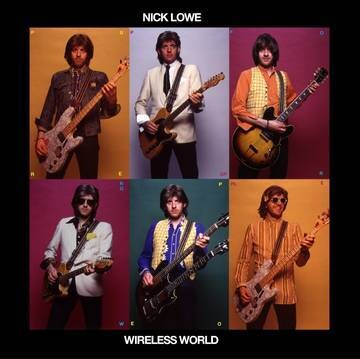 In true Stiff Records fashion, Jake Riviera (Stiff's founder) and Nick Lowe were looking for any opportunity to mess with music journalists ahead of the release of Nick's debut solo record. Jake and Nick had already learned that the album title, Jesus of Cool, would not be appropriate for the US release on Columbia; stateside it would be known as Pure Pop for Now People. Jake and Nick loved that the album would have two titles because it would lead to confusion. But then they thought "why stop at two titles?" Jake and Nick made it their goal to feed as many conflicting stories as possible to journalists, including giving fake album titles for Nick's debut to interviewers. This resulted in one paper "exclusively revealing" to readers that Nick's solo debut would be titled Wireless World. While Jesus of Cool and Pure Pop for Now People gave Nick his rightful place on the power pop plateau, the whispers of Wireless World faded away as mysteriously as they appeared. Now, for the first time ever, Wireless World is being issued on LP more than 40 years after first being reported. The album combines the tracklisting of Jesus of Cool and Pure Pop for Now People into one studio album.