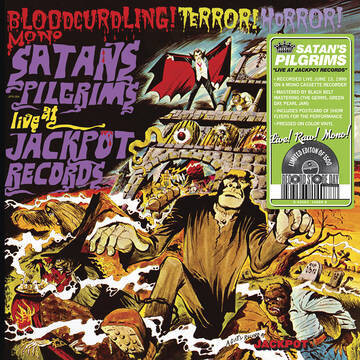 In the spring and summer of 1999, Satan's Pilgrims were awaiting the release of their self-titled fifth album. On June 13, 1999 an in-store performance was recorded live at Jackpot Records onto a mono cassette recorder. Since they were promoting a new album which was yet to be released, none of those songs had been performed in front of a live audience before. Both Jackpot Records and Satan's Pilgrims agreed that this lo-fi boombox recording should be released as is and sonically unaltered, since it really captures what it was like to be standing a few feet in front of the band vibrating the entire block. What could be more "Record Store Day" than an album recorded IN a record store? Limited Edition of 1500 copies. Includes a show flyer for the performance. Pressed on lime green vinyl. Mastered by Black Belt Mastering (The Germs, Green Day, Pearl Jam).