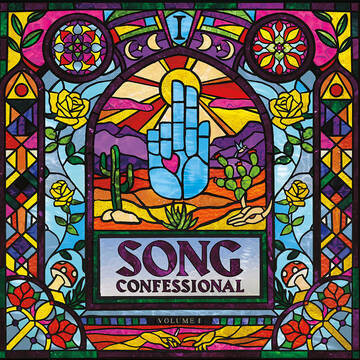 Song Confessional is a songwriting project started by Austin musicians Walker Lukens, Zac Catanzaro and Jim Eno (Spoon) that collects anonymous stories to share with songwriters who write and record original songs inspired by them.

Originally conceived as a festival activation, Song Confessional has traveled all over the country recording anonymous stories at SXSW, Luck Reunion, Newport Folk Fest, Trans Pecos, Artsplosure, and has produced songs for Houndmouth, !!!, Kat Edmonson, David Ramirez and Wild Child whose song "Going In" has over 8.3M plays on Spotify in the last year.

In addition to releasing the songs digitally, the project features some of the songs on its Podcast, Song Confessional, where you hear the anonymous story, the song it inspired, and an interview with the songwriters who wrote it. Distributed by NPR-affiliate station KUTX, the podcast has already built a decent following with 450k monthly listeners on Spotify.

Partnering with the Bunkhouse Hotel group, Song Confessional has installed a permanent 24-hr confessional booth at Hotel Magdalena. Anyone can go record themselves telling their story for a chance to be part of the Song Confessional Project.

Pressed for Record Store Day 2022 is a limited edition vinyl compilation featuring some of the standout songs already released from the project. It also features an unreleased new single from Houston-bred rapper Fat Tony, inspired by a confession given in the booth at Hotel Magdalena.

Don't Let Me Die In Waco - Croy and The Boys
I Can't Wait - Kam Franklin
Going In - Wild Child
My-Polar - Jake Lloyd
Where I Am - Kat Edmonson
Long Distance Pandemic - GGOOLLDD
Who Did You Call - Husky Loops
All I Wanted Was A Photograph - !!! (Chk Chk Chk)
Sugar Daddy - Fat Tony