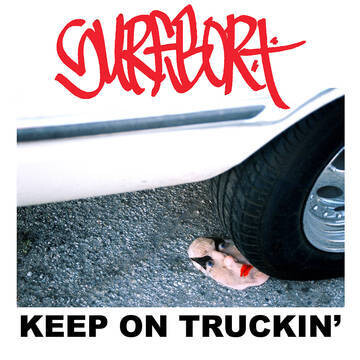 The day has finally arrived! LA punk superstars Surfbort have just released their new raucously outrageous and much anticipated album, Keep on Truckin’ on vinyl! This is a record filled with boisterous humor, deep emotion, political commentary as well as ramshackle punk rock spirit. The album was produced by multi-platinum award winning songwriter and Grammy nominated producer, Linda Perry. “In an age of division where presentation has trumped content, where billionaires blast into space as the wealth gap increases and the entire society teeters on the spectrum of addiction, Keep on Truckin' reminds us that we're all geniuses and idiots, and that love, humor, magic, and the human sitting next to you are the only antidote to the capitalist hellscape,” says singer Dani Miller. Guitarist Alex Kilgore chimed in that “the album is comprised of 12 songs for a new world, a call to arms to blast love: a panacea to the corporate hellscape we live in." Surfbort is releasing a limited edition blue vinyl in collaboration with Record Store Day on April 23rd, 2022.

The album is resonating in the skate-punk scene and caught the attention of female pro-skater, World Cup Champion, and Olympian Lizzie Armanto, who makes her directorial debut and appears in the video for fan-favorite, “Lot Lizard.” Self-proclaimed Surfbort fan, Tony Hawk (needs no introduction) stars in their upcoming video for “Open Your Eyes.” The band has an upcoming US and UK tour to support the new album and share this incredible body of work with a global live audience.

"A glorious stumble through the gamut of emotions. "- DIY Magazine