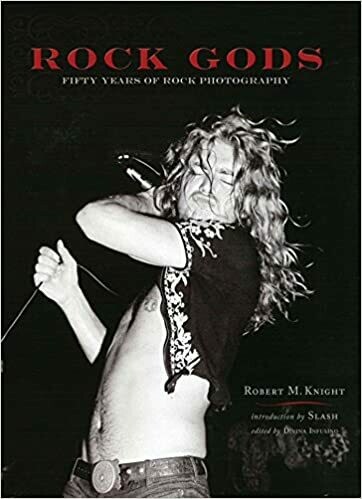 In 1968, a young photographer named Robert M. Knight arrived in Seattle with a camera and a single roll of film to shoot local legend Jimi Hendrix. The photographs Knight took seized the uncanny energy of Hendrix and documented his primal performance and adrenaline-driven solos that tantalized audiences. The iconic images Knight produced immortalized Hendrix and propelled Knight on a life-long pilgrimage as the photographic herald of rock and roll.

Rock Gods: Fifty Years of Rock Photography is the rich visual universe of Robert M. Knight's work, replete with visions of guitar gods, monumental performances, and earth shattering solos that chronicle the greatest moments in the evolution of rock music and culture. His remarkable photographs define generations of rock stars from the Rolling Stones and Led Zeppelin to Run DMC and Green Day. With Rock Gods, Knight captures the grueling riffs of Jimmy Page, the flamboyant solos of Elton John, Slash's steel resolve, and Eric Clapton's soulful blues. With his intimate access and friendships with many of his subjects, Knight's photography fashions a unique perspective on the world of rock stars, creating some of the most compelling and evocative portraits of popular musicians witnessed to date.

Through the haze and jagged reverb, Rock Gods captures the ephemeral candor of the stage, visually asserting the impassioned substance of rock that incites our souls.

Rock Gods is now available in an elegant paperback edition.