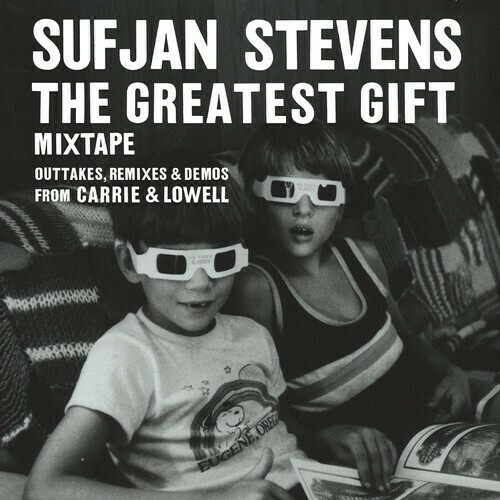 The Greatest Gift is a mixtape of outtakes, remixes and demos from Sufjan's 2015 album Carrie & Lowell. This collection serves as a companion piece to the Carrie & Lowell Live album released earlier this year (and as an expansion to the original album). In the same way the live show featured re-interpretations of the songs from Carrie & Lowell, the mixtape unveils new remixes by several longstanding collaborators including Roberto C. Lange (aka Helado Negro), Thomas Bartlett (aka Doveman), and James McAlister (aka 900X). The album also features Sufjan's own remix of "Drawn to the Blood." The mixtape includes a few alternate and/or demo versions of songs from the original album. The digital release also contains an iPhone demo of the song "Carrie & Lowell." The mixtape features four previously unreleased new songs, "official" outtakes from Carrie & Lowell (they were recorded at the same time as the album). These include "Wallowa Lake Monster," "The Hidden River of My Life," "City of Roses," and "The Greatest Gift." This new material, in it's investigation of love, life, death, God, and the beautiful state of Oregon, serves as a contemplative companion to the original album. We hope you enjoy.