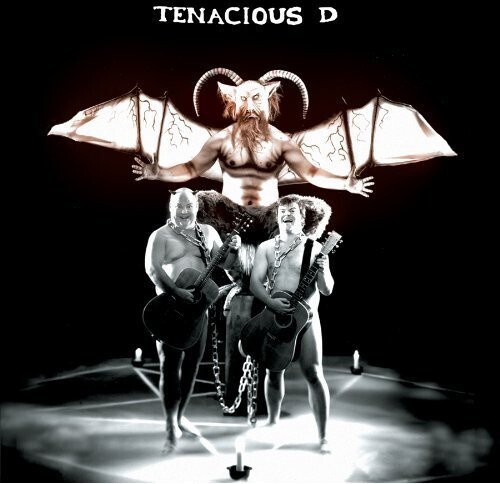 For their first album, they enlisted the help of drummer Dave Grohl, keyboardist Page McConnell of Phish, guitarist Warren Fitzgerald, and bass player Steven Shane McDonald. The Dust Brothers produced the album. The majority of the songs on their debut album stem from early versions as seen on their HBO TV series, Tenacious D. The recording session for the album began with a two-day session at Neil Diamond's ArcAngel studio in Los Angeles where initial drum tracks were recorded. They were able to use the studio because Diamond had just appeared with Black in the film Saving Silverman, in which Black plays a Neil Diamond cover singer. "Diamond claims it was the Liberty Records studio," King says. "It's a really old place." The front cover features Black and Gass standing naked below the Devil. The pose is similar to that shown on some Devil tarot cards. Due to the Satanic nature of the cover, the album was briefly recalled from stores The band performed in front of this at concerts. Bonus tracks "Pat Riley" (acoustic) - (12th Anniversary)