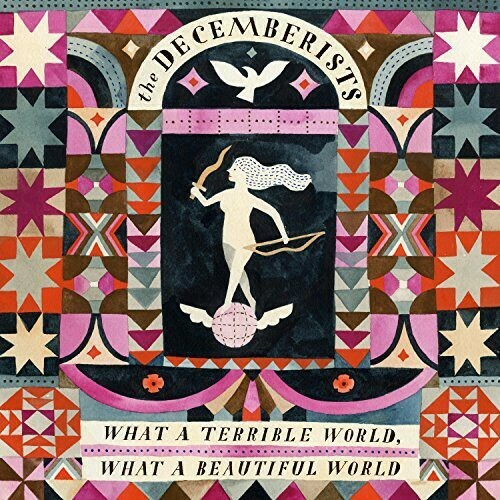 The Decemberists What a Terrible World

Vinyl LP pressing. 2015 release, the seventh studio album from the Alt-Rock band. Produced by the band and long-time collaborator Tucker Martine (My Morning Jacket, Neko Case), it is The Decemberists' first full-length studio album since 2011's THE KING IS DEAD, which debuted at #1 on the Billboard 200 in Jan of 2011. From the soaring first single 'Make You Better' to the acoustic ruminations of the Nick Drake influenced 'Lake Song' and triumphant closer 'A Beginning Song', WHAT A TERRIBLE WORLD, WHAT A BEAUTIFUL WORLD, is the band's most varied and dynamic work, both musically and emotionally. Since their earliest recordings more than a decade ago, The Decemberists have always been known for their sense of scope and daring-from "The Tain," an eighteen-and-a-half minute 2004 single based on an Irish myth to their last two ambitious, thematic albums, THE HAZARDS OF LOVE and THE KING IS DEAD. This time, though, Meloy explains that they took a different approach: "Let's make sure the songs are good, and eventually the record will present itself."