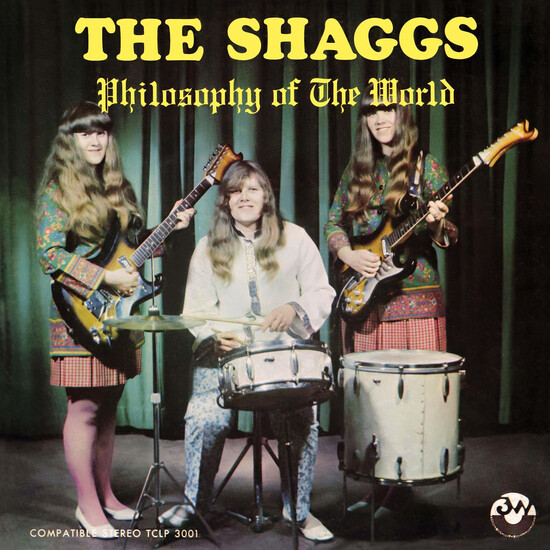 The Shaggs / Philosophy Of The World

In 1968, three sisters from Fremont, New Hampshire strapped on their instruments and declared themselves The Shaggs. At that moment begun a peculiar tale that would last far beyond the group’s five-year run. Dot, Betty and Helen (and occasionally Rachel, the fourth sister) played in the group on the insistence of their father, Austin Wiggin Jr., who was convinced they were going to be big. Years earlier, Austin’s mother gave him a palm reading, predicting that her son would marry a strawberry blonde woman, that he would have two sons after his mother died, and that his daughters would form a popular music outfit. The first two became reality, so Austin was certain the third would follow suit.

With pure confidence and his mother’s bold prediction, Austin decided that his daughters would forgo attending the local high school in favor of home schooling interspersed with a strict regiment of instrumental and vocal practice, along with jumping jacks and sit-ups. Soon after The Shaggs would enter Fleetwood Recording studios in Revere, Massachusetts to record their sole album, Philosophy Of The World, a collection of garage rock tunes that balanced charm and discordance in equal measure. Austin would spend most of his savings not only on the session but also on the manufacturing costs to press up 1,000 copies of the album (900 of which mysteriously vanished upon completion).

The album failed to fulfill Austin’s expectations of rock stardom, though the group remained together until their father’s death, performing frequently at the Fremont town hall and a local nursing home, no further albums were released. That might have been the end of it, until rock band NRBQ discovered a copy at a Massachusetts radio station and re-released it in 1980. Rolling Stone’sreviewer at the time described it as “the most stunningly awful wonderful record I’ve heard in ages”.

Nearly 50 years later, the album ranks among the most polarizing LPs of all time. Some said it was the worst thing ever made. Others felt it was one of the great long players of the 20th century. Frank Zappa famously dubbed the band “better than The Beatles”, while Kurt Cobain placed the album at #5 on his list of Top 50 favorite albums. Original copies of the album fetch for $10,000.

Decades later and one could argue that maybe Austin was right all along. We’re all here, still enthralled by the purity of The Shaggs.