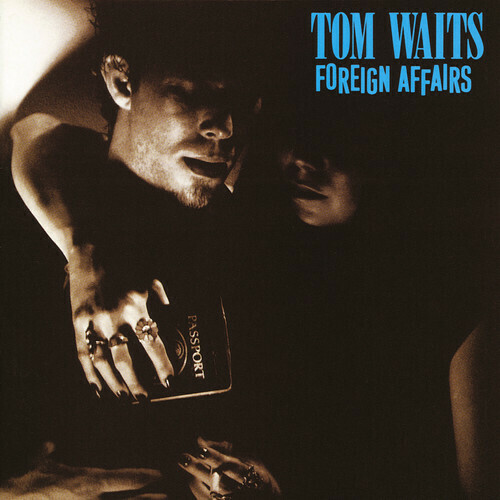 1977's Foreign Affairs takes the jazz and poetry that Tom Waits explored on his earlier albums in a more cinematic direction, foreshadowing his own breakthrough work in the 80s. Opening with the instrumental "Cinny's Waltz" and featuring some new standards like "Muriel" and "I Never Talk To Strangers", his dramatic duet with Bette Midler, this album gets into some of Waits' most ambitious storytelling ever. Foreign Affairs also features the jazzy, colorful "Jack and Neil" and the sweeping, dramatic "Potters Field" as well as classic Waits ballads "Burma Shave" and "Sight for Sore Eyes". Tom Waits is a critically acclaimed singer-songwriter, musician, composer and actor. His deep distinctive gravelly voice was described by critic Daniel Durchholz as sounding as though "it was soaked in a vat of bourbon, left hanging in the smokehouse for a few months, and then taken outside and run over with a car". Waits has built up a distinctive musical persona with his trademark growl, his incorporation of pre-rock music styles such as blues, jazz, and vaudeville, and experimental tendencies verging on industrial music.