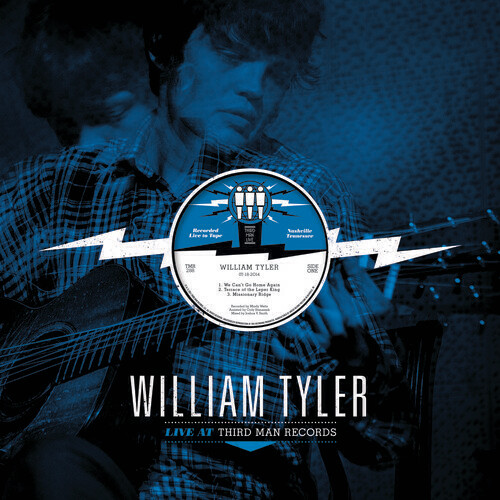 Recorded on July 18th, 2014 as the opening set for Peter Walker's psychedelic guitar experience, William Tyler's Live at Third Man Records LP was buried for far too long in our backlog of masters. To release it too soon would have been to unleash the secrets of the transcendent and acclaimed new record Modern Country (Merge, 2016) before they had a chance to manifest. Too wait any longer would have been torture for us. Originally planned to be a live single, the full, 5-song performance was too truthy, too seamless, and too perfectly whole to be whittled down to two tracks. So, surprise! A live LP is born. For those unfamiliar with William Tyler, his story is Nashville legend... born into a songwriting family, Tyler was tapped by Kurt Wagner to become a member of Lambchop at age 19 (two decades younger than the other members), and quickly became the 'architect of the band's sound.' From there, Tyler went on to back up the Silver Jews, Bonnie 'Prince' Billy, Charlie Louvin, and others... all the while writing songs for his configuration of choice: fingerpicking solo guitar. The acoustic simplicity of his first two albums remains in his most recent effort (which he describes as 'a love letter to what we're losing in America. To what we've already lost'), and on this live LP, but Tyler is bringing more depth and more experimentation to his compositions of late. 'Gone Clear' (known as 'Going Clear' at the time of our recording) which appears on both records, is a melting pot of ideas: a drone reminiscent of Hindustani classical music, a central melody that sounds distinctly Appalachian, a devolution into a kaleidoscope of colors and ideas that it's hard to believe is being produced by a single musician. This layering of textures is Tyler's trademark, and even more awe-inspiring live. We like to think that with the purposeful lack of smart phones, bars to saddle up to, and, of course, corners, concert-goers in the Blue Room tend to be more in-the-moment than in most performance venues. But it's a rare artist who can take the already focused atmosphere in the room and quiet every last busy mind - Tyler did just that. This immortalization of the performance in all it's transmundane glory will entrance you from first note.